Hosted PBX failpoints to avoid at all costs | Flowroute Blog

Hosted PBX failpoints to avoid at all costs

I know what you’re thinking. “Features. It’s features right? If I don’t pick the right features for my hosted PBX, oh my gosh, I’ll be a huge failure.”

I understand. The way most hosted PBX providers talk all about how all the features they offer are “must-haves”, it can certainly feel like functional features are the most important consideration when picking a platform to use. But the reality is, most (/all) of the features you really need are quite standard. And if they aren’t, they’re probably so niche you won’t ever use them (except once, to say you did). But hey, they sound cool at the top of a list of bullet points on a provider’s home page.

The monolithic list of PBX features laid before your VoIP system can be intimidating, but they’re window dressing distracting from more fundamental issues. And these issues stem from the fact that for the sake of saving your company massive capital investment, you’re not buying a physical PBX to rack in a closet on prem. Instead, you’re going to pay someone else to let you use their PBX remotely.

Thanks to the marvels of modern technology, you don’t need to keep your phone system management hardware within the physical confines of your office walls. You can pay someone else to keep it somewhere else for you. The PBX kept elsewhere can be managed by someone else or managed by you. For the sake of this post, I’m talking strictly about PBXs managed for you.

A hosted PBX is someone else’s PBX physically located somewhere else that they let you use because you pay them to. The cool thing is you’re not all that responsible for watching your PBX like a hawk (that’s part of what you’re paying for). And because you’re sharing the server with your fellow tenants, your costs are a fraction of picking up the gear yourself.

Who’s in charge of your hosted PBX can make all the difference to the reliability of your phone system. Choosing a host incorrectly can lead to multiple failures on multiple levels, i.e. total disaster. 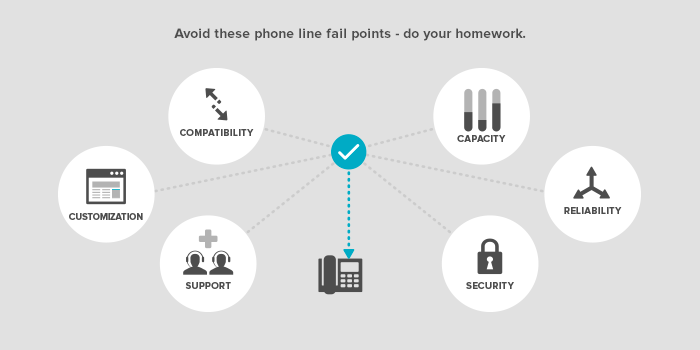 It doesn’t take much to throw up a PBX for hosting. With the right YouTube videos, your Gramma could probably pull it off in an afternoon. You have to think, the reason people are offering hosted PBXs is as a business venture. They’re going to make more profit if they rent their PBX out to more users. The more users using the exchange, the less bandwidth available to individuals. As the server becomes congested, service is affected and you’re dealing with a potentially nasty tasting failure.

So be aware of the capacity of your host. Make sure they aren’t some fly-by-night Gramma operation shoehorning users onto a single Asterisk server. You need a robust platform with lots of room to handle all the rent-a-traffic and any unseen neighbors hogging all the capacity.

There are hosted PBX providers that for whatever reason limit your options. They work exclusively with certain hardware manufacturers, so like it or not, you’re using the phones they want you to use. The failure comes in when those phones aren’t the phones that make the most sense for your business. You should be the one making that decision.

The real deep-down phone system boosting power of a PBX lies in its capacity to be customized to your operational needs. Feature set is a big part of that. But so is responsiveness. You need changes to functionality and routing to be quick and easy, because your business won’t slow down while you wait for your provider to “get to your request.” A system that doesn’t adapt to your business isn’t worth your time or money.

That means a hosted PBX that gives you robust web-based management controls and is backed up by a support team with the bandwidth and ability to address your needs quickly. A provider that focuses solely on hosting your PBX, instead of also providing your phone service and equipment, is going to be more able to address specific questions you have and resolve issues more precisely simply because their support team will be more specialized.

A big fail many decision makers make is assuming support will be effective. Having support is not enough when all they do is answer phones (or only emails) and point fingers somewhere else. You need ready access to a knowledgeable support team with the expertise to troubleshoot your issues. A farmed out call center wearing six hats at once is bad for your uptime.

Dig below the surface on support. Know availability, including time zone, and ask about tiers and any pricing that may come into play with escalations. Ideally you want highly available live phone support (talking about an issue real-time is way more productive than emailing back and forth) that can address major issues at the first tier without charging you a thing. If it takes you less time to figure out a solution, what are you paying for?

One way to insulate your hosted PBX from support fails (if comes to that) is with a reliable service. That means geographically distributed synched servers and the ability to shift the location of your host server in the event you foresee a disaster heading toward your data center (e.g. a giant hurricane storming up the coast to New York…) so you can get the foundation of your phone system out of harms way.

So if you’re choosing a hosted PBX vendor, find one that doesn’t put all of your eggs in one basket. Look for at least two geographically distinct locations that are synched on the regular. Ideally your host will give you the freedom to move from server to server whenever you want. It should be easy and fast and in your control through a web interface.

Perhaps the biggest failure you can make is not securing your VoIP phone system. Internet telephone fraud is a thriving 21st century black market industry.

Make sure whoever is managing your stuff is employing an intrusion prevention system. If fraudsters get into your provider’s network, they’re into your phones. You also need to have security options, in the form of firewall rules, on your actual PBX.

The web interface you use to access and manage your PBX needs to be secure too. Are there security tickets installed? Without an SSL certificate, or VPN, or SSH, your account interface, and thus your entire PBX including VoIP and SIP trunking accounts, is at risk of fraud intrusion and any number of really bad, scary, expensive outcomes.

Your options are almost limitless when it comes to how your PBX is hosted and configured. But these core fail-safes will keep your phone system as operational as possible, while protecting you from disaster, and the devious minds of web bandits on the prowl for juicy phone systems to exploit.

Choosing a platform for your phone system is not to be taken lightly. As much as our ancestors in the 60’s thought we’d all be communicating via telepathy by now, phones are crucial to your business operation. An avoidable failure that takes down your phones because you didn’t do enough homework to secure your PBX against these perils could cost your company clients, revenue, and reputation (or worse, everything), and may even cost you your job.  Stay safe, take your time, and avoid PBX failure.