The Yealink VP530 is the latest addition to Yealink’s line of what they’re calling, “executive-level IP Video Phones”. Obviously targeting executives and upper management, the online phone description touts ease of use, productivity, and a high degree of customization. 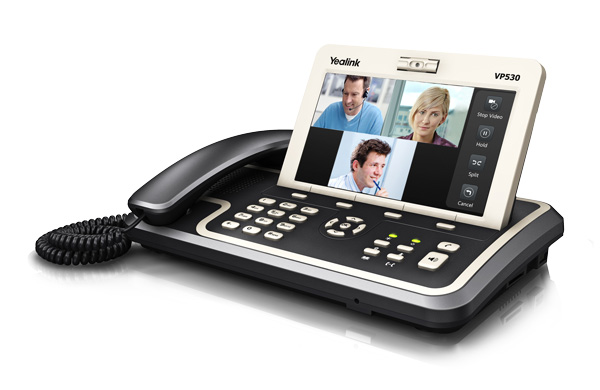 It’s an impressive looking phone with a 7” 800×480 digital LCD, touchscreen in addition to a full-featured keypad. I didn’t test the phone’s video capability but the screen offers a whole lot more functionality than just seeing who you’re talking to. This video goes into more feature detail.

I give the phone high marks for hardware. Overall the phone feels really nice. It’s sturdy, the screen is clear and easy to read. It’s not as heavy as some snom or Polycom phones, but some people like that.

From a usability standpoint, the keypad buttons are well laid out. The buttons feel solid, but leave a bit to be desired when you depress them. The icons and screen interface are intuitive, and everything is easy to find.

Functionally, the touchscreen is responsive and snappy, and the menu layout makes sense and I was happy that there aren’t many layers to dig through to get to key functions.

I was a little annoyed that the camera on the phone is always on with a live feed of the camera output in one corner of the display. I don’t know about you, but I found my own ugly mug staring back at me all day from the side of my desk a little unsettling. Luckily the camera can be disabled entirely through the config interface, but a hardware on/off switch for the camera would have been appreciated.

Side note: In testing, it appears that the VP530 is using the same underlying SIP stack as all other Yealink phones, which can have some occasional stability issues. So while I didn’t encounter it in my testing, don’t be surprised if this device needs to be power-cycled every week or so, just like your trusty old Yealink T22P.

I didn’t get to test the phone with a headset. The sound quality from the handset is really clear regardless of the codec. The speakerphone was about average and could fill up your personal office without a problem. It’s not ideal if you want to place in the middle of a conference table or have a bigger office. There isn’t any noticeable noise canceling on either the handset or speakerphone, so I wouldn’t use it in a noisy environment without a good noise-canceling headset.

My tests of the VP530 proved SIP RFC 3261 compliance. One major issue I ran into was when provisioning a non-Flowroute DID or adding multiple registrations. In both cases, the phone does not validate inbound RURI. Any INVITE sent rings all enabled lines. It’s something to be leery of if you’re connecting your phones directly to a SIP trunking provider without going through a PBX which is why I gave it a 6 in this category.

The VP530 is a nice phone that’s easy to use. It looks great and feels natural. The only issue is that it doesn’t fit well into situations where more than one direct line to your SIP trunk is required, but works like a champ with PBXs. If you’re looking for a modestly-priced executive phone with great features, look no further.

Reviewed by Justin Grow on

As the business world continues to embrace remote operations, companies are reconsidering how to power their telecom to best support a restructured workforce. The current business ecosystem is ushering in…

In The Media Telecom APIs: A Key IT Tool to Scale Services and Improve Customer Experiences June 15, 2021

This article is condensed and originally appeared on the Network Computing Website. Businesses are actively using Telecom APIs to support their distributed workforces, boost customer service and retention, and enable…