ClueCon 2018 has officially kicked off. Once again, we’re super excited to be amongst our FreeSWITCH people in Chicago. 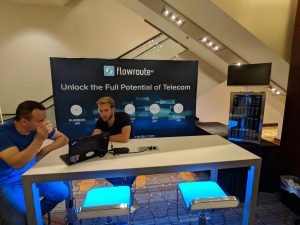 For those of you who have not discovered Cluecon yet, it is THE event for communications developers. In a nutshell, it’s all about telephony apps; using open source for days, and of course a bunch of phone phreaking. The team from Flowroute will be there serving up energy drinks in the booth, so stop by to get amped and of course talk about communications APIs and of course SIP Trunking.

The party of all parties is being hosted by Flowroute

This year we are sponsoring the party of all parties on Monday, July 23 at Dick’s Last Resort starting at 6:30 PM CT. There is something for everyone – food, drinks, and games. We’re hoping to see some epic pictures posted on social before the night is over. Don’t forget to @flowroute and add #Cluecon2018 to your posts.

Let’s get our automation on with Julien Chavanton

On Tuesday at 3:15 PM ET, Flowroute’s SR. VoIP engineer Julien Chavanton will be presenting “End-to-end test automation using VoIP_Patrol”, where he will discuss the investments Flowroute is making in integration testing, load/stress testing and end-to-end testing to ensure our customers hosted SIP Trunking has the highest reliability and scalability. Julien will also introduce a new end-to-end test automation application, VoIP_Patrol, which is built on the high-level API PJSUA2.

In support of the event, our product team has been working on a number of new tech articles to support the FreeSWITCH community.

If you are looking for more information about our APIs, check out our developer resource center. If you want to meet up with the team from Flowroute stop by our booth anytime throughout the event. We look forward to seeing you soon!