Managing phone numbers and routes is important to businesses both large and small. In the same way, the cloud has transformed how applications are written, tested, and deployed, the ability to scale your communications solutions via APIs provides unprecedented control over calling and messaging within your organization. The Flowroute v1 API allows users to manage phone numbers and purchase new phone numbers over a RESTful HTTP interface. This is useful for integration with existing backend and web-based systems, but sometimes administrators want direct access to get things done. Phone number management is just a command line argument away when you leverage the Node.js SDK for Flowroute and a few lines of code.

To get started, you’ll need:

The next step is to install the Flowroute Node.js SDK for Numbers.

The Flowroute SDK for Node.js (v1) is available as open source on GitHub at: https://github.com/flowroute/flowroute-numbers-nodejs

Navigate to the root directory where you store your development projects and pull the repository by cloning it with the command:

You should see a result similar to Figure 1. A directory named flowroute-numbers-nodejs will be created.

Make note of the directory but don’t navigate to it yet. The next step is to create the project for command line access.

From the command line, create a new directory named flowroute-cli and navigate to it. Initialize a Node.js project by issuing the command:

You will be prompted with several questions. Name the package and version, add an optional description, set the license, etc. The result will look something like Figure 2. 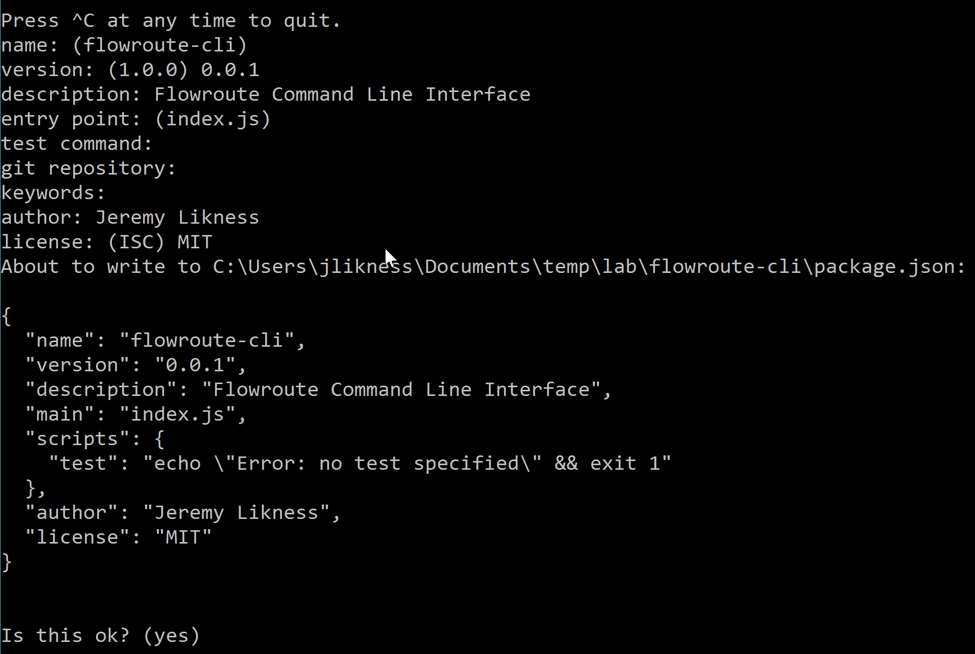 If you want to track source control, you can issue git init to initialize a new git repository. Navigate into the SDK folder you installed previously. The folder path should look like this:

For example, if SDK directory is the same level as your command line project, you can issue this command from the root of your flowroute-cli project:

In Visual Studio Code, your project structure should look like Figure 3. You will see additional files such as CustomAuthUtility.js and flowrouteUtils.js. 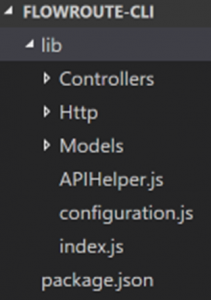 Now that the SDK is accessible from your project, you can add a few additional libraries to help with development.

There are three packages to install that are needed for the command line project to work. The first two are used by the Flowroute SDK and are needed to issue HTTP requests and decode the resulting data. These packages are named request and utf8. To install them and save them to your project, issue the following commands:

This will download the packages and update the package.json for your project with the dependencies.

The next package is a utility called commander. This utility makes it easy to parse command line arguments and take various actions based on the commands passed. It is useful to help construct a command line interface for the Flowroute phone number API.

Now that the prerequisites are installed, you can build the command line interface.

The first step we’ll tackle is authentication to the API. From your IDE, create a new file and name it fr.js (for Flowroute). The main program will be wrapped in an immediately invoked function expression (IIFE). This ensures the variables used are scoped to the function itself. As arguments, you’ll pass in the commander library and the Flowroute SDK. The shell looks like this:

Save the file and run it from the command line to ensure everything is working correctly. Pass the file to node: 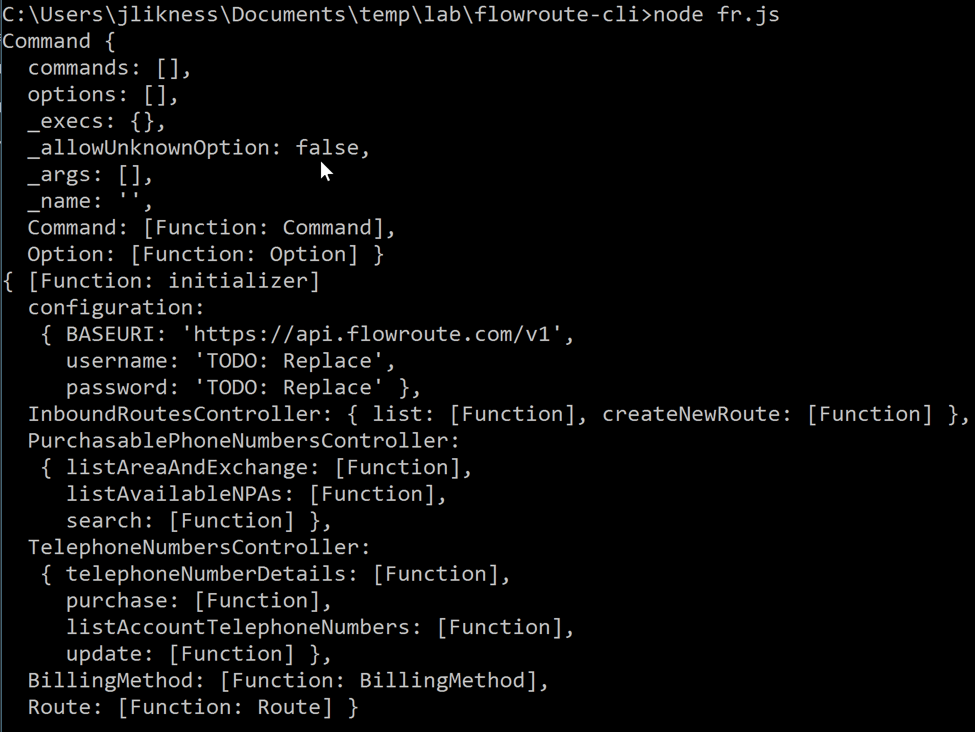 The first run will just show some structures from the helper packages. The two console.log statements just test that everything is working properly. You can go ahead and remove them.

There are two ways to authenticate with the Flowroute API. The first is to edit the configuration.js file under the lib folder. The username maps to your access key and the password maps to your secret key. Both are available at https://manage.flowroute.com/accounts/preferences/api/. If you store them here, you will not have to pass them every time you invoke the command line. However, you also risk exposing the credentials. Although it is beyond the scope of this article, if you want to securely store credentials you can install other third-party libraries that allow you to encrypt the credentials.

You can also choose to pass in the credentials as parameters each time you run the command. To do this, a method declaration instead the IIFE. It will use the commander package to check if a username and password exist, and pass them to the Flowroute SDK.

Now you can pass the version of the command line interface and the parameters to the commander package. The notation provides short-hand (-u) and long-hand (–username) parameter name and notes that if the parameter is used, an additional argument is required due to the angle brackets.

The very last two lines of code inside the IIFE tell the commander package to parse the command-line arguments and call the configure function to set up the username and password if they exist:

Run the command again, without passing any information. It should do nothing. Now run it and pass a username and password:

You should receive the message “Overrode username and password.”

As a side note, the commander package automatically builds help text based on the parameters and commands you configure. Pass the –help parameter to see this in action.

The first command will list area codes (NPAs) using the Flowroute API. The API supports limiting items and paging through long lists. To keep this example simple, it will always load the first page. As the first statement inside the IIFE, set a default number of items to bring back:

Inside the configure function, add support to override items with a parameter:

Add the parameter to the commander configuration after the password parameter:

Now the interface will default to ten items unless you override them with a parameter. To add the command to list NPAs, there are two steps. First, add the method that will retrieve the results and either show an error or list the codes:

Because configure will be called from inside each command, remove the previous call you made after parsing the arguments. Notice that the SDK accepts a limit for items and a method to call when the results are ready. This enables the SDK to asynchronously fetch the information from the Flowroute server.

Now you can run the command to test it:

The result should be a list of available area codes. On my machine, it provides a list from 201 to 210.

Next, you can build out the additional commands. Here is the code to list area codes and exchanges (the SDK documentation describes the structure of the result data):

The command is configured to accept an area code and filter the available exchanges. It is passed a hard-coded page number (one) and then the method for callback:

As you guessed, the next logical command will list the available numbers for an exchange.

For listing numbers, a simple helper method will format the numbers to display:

This uses JavaScript’s template capabilities to evaluate inline expressions to format the result string. One method uses a “search” feature to search for available numbers given an area code and exchange. The other method simply lists the numbers that you already have configured in your Flowroute account. 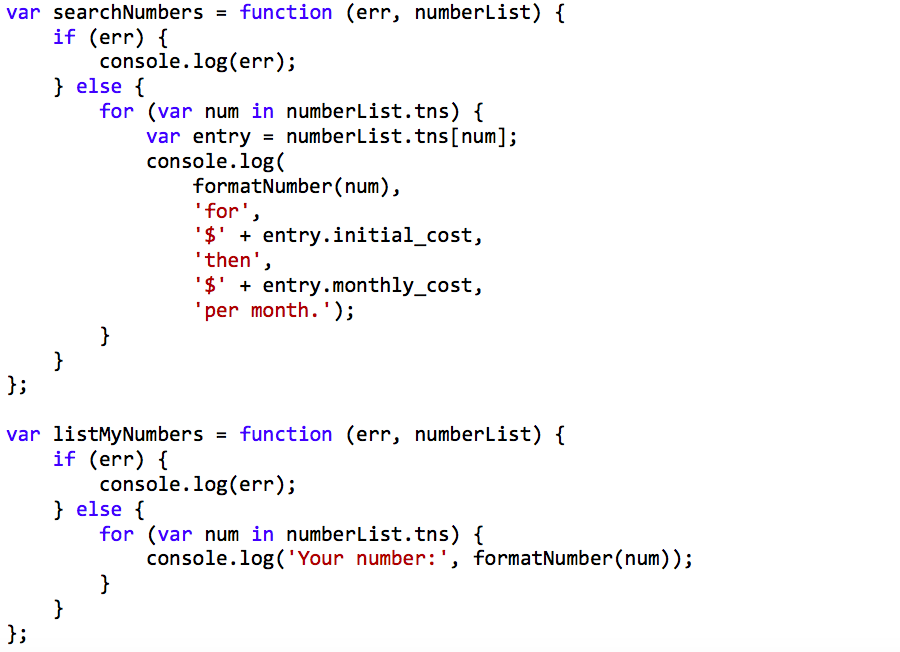 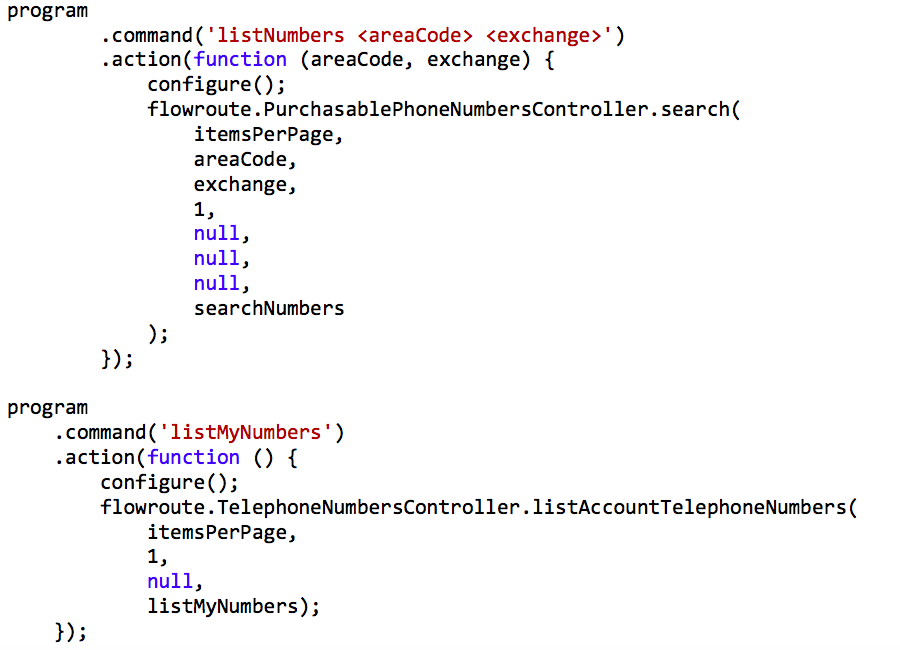 Then call the method. Figure 5 shows an example run to list numbers in area code 813 with exchange 321:

Use the listMyNumbers command to see what numbers are already in your account.

The Flowroute API is extremely flexible and the SDK makes it easy to build custom functionality to interact with your account. The Flowroute Command Line Interface demonstrates how a little code can produce helpful utilities to boost productivity. This example just scratches the surface of what is possible. Potential enhancements include building support for paging long lists and allowing you to purchase and route new numbers directly from the command line. To learn what else is possible with the Flowroute v1 Numbers API, visit this link: http://developer.flowroute.com/api/messaging/overview.