The FCC and VoIP | Flowroute Blog

The FCC and VoIP: Accelerating the future

VoIP is getting 5 million more potential users in America. That’s a big jump. And the reason for this jump will do more than promote innovation in Internet telecom. It will create new industries and change the way we interact with the world.

This spring, the FCC moved closer to the next phase of its Connect America Fund. Phase 2 of the Fund plan will increase financial support for broadband and voice service by 70%, bringing the total spend to $9 billion over the next 5 years. The additional funding will bring 21st century communications to under-connected Americans in rural areas.

The basis for the project is to level the playing field for consumers to make sure everyone’s on equal footing when it comes to speed of access, no matter where they’re located. One proposal for phase II is to boost the download speed subsidized ISPs will be required to provide from 4Mbps up to 10Mbps. It is also proposed that the FCC further subsidize mobile bandwidth in rural areas to ensure greater access to 4G LTE connections.

Obviously, this is good news for Internet telephone service providers.

The funding infusion will bring an additional 1.5% of the American population into a speed bracket more conducive to Internet telephone service. As users gain faster access to the Internet, Voice over IP will become more widely used, accelerating the transition to an all-IP user base and the driving the TDM network closer to a shallow grave.

For anyone still thinking about reselling SIP trunking, now is the time to establish your business. Especially if your plan is to service underserved rural areas.

If I could predict exactly how the landscape will change, I’d be sitting a lot closer to Tom Wheeler. But the scale of change could be huge. Look at what happened to the mobile industry when cell phones got smart. Dumb phones got cheaper/more accessible and the user based ballooned. And all of a sudden desktop app developers started developing mobile apps and never looked back (Remember, the Apple App Store was launched only 6 years ago…).

This news is also a wake up call.

You know how those cable companies that are sitting around complaining about Netflix, or the music sales sites trying to slowdown the Spotifys and Pandoras of the world? They’re fighting a tide that’s not going to recede. Which means they’ll probably drown. The same goes for the local telephone service providers who are trying to tell people copper transmission lines are the way forward.

Anyone else notice Amazon and Apple recently acquired music streaming platforms? They’ve recognized that expanding the availability of bandwidth this significantly is going to speed our overall consumption of live, real-time data. From our perspective, that means more voice packets traveling over the Internet’s tubes. And that gets us excited.

From your perspective, it’s time to start transitioning your communications into the digital realm. Things are going to move fast. If you’re not already integrating digital communications, examine Unified Communications platforms. Learn about WebRTC and how you can implement it into your communications suite. Ask questions like, “What’s our mobile strategy?” and “how do we deal with BYOD?”

Indirectly or not, the FCC is taking more and more steps to make Internet voice services more and more accessible for home and business users. Any organizations not enjoying the benefits of Internet phone service are about to get left even further behind than they already are. Don’t be one of them. 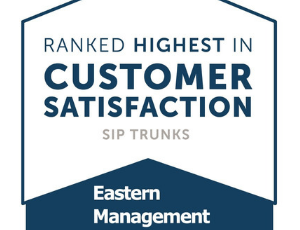 Eastern Management Group (EMG) has ranked Flowroute as top-rated SIP Trunking Provider for 2020 in Customer Satisfaction! EMG surveyed more than 3,000 IT managers, and asked them to evaluate 29…

Articles STIR/SHAKEN and Recent Updates from the FCC November 27, 2020

While technology continues to improve and sustain our connections to others, it is not without occasional challenges or intrusions. For many businesses, robocalls can be an annoying and potentially invasive…

For one week every November, we’re reminded of the global efforts to protect against telecom fraud. During International Fraud Awareness Week, which takes place from November 15 – 21, it…